Home » Articles » How to recognize clients with menopausal symptoms

How to recognize clients with menopausal symptoms 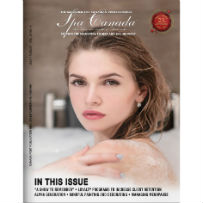 As skin care therapists, we all know first-hand the effects of menopause on the skin, such as thinning epidermis, dryness and wrinkles. I want to draw your attention to the mental wellbeing aspect of menopause.

You may have seen the signs without recognizing them: nervousness, anxiety, lack of confidence. The mood swings caused by sweeping hormonal changes in a woman going through perimenopause (the period before menopause) or menopause can visibly affect the way she reacts to her environment. Even loud noises can be upsetting.

The fact that most spa environments are bathed in soothing sounds is a good start. But to women at this turbulent stage in their lives, spas can be a transformative oasis.

Moving beyond anxiety at menopause

Besides being a professional spa consultant, I have another, more personal interest in this topic. My sister Catherine O’Keeffe has written a book with the rather long title The Best Friend’s Guide: A Practical Toolkit for Moving Beyond Anxiety at Menopause. Using the handle The Wellness Warrior, she has also launched a website (wellnesswarrior.ie) and has worked closely with Aisling Grimley of the menopause-supportive website My Second Spring (mysecondspring.ie), which counts more than 2 million subscribers from all over the world.

Catherine has been touring her native Ireland to speak at halls and theatres packed with groups of women wanting to learn more about perimenopause and is frequently interviewed on national radio and in print.

So, in a way, perimenopause and menopause are a family affair. And while no two women experience them the same way, the most common symptom is probably anxiety. Women can wake up with a strange feeling in their body – of being unsettled or somehow off-kilter, which can grow to near-crisis proportions (faster heart rate, dry mouth, sweaty palms) if not swiftly attended to.

Other common menopause symptoms include:

How spa therapists can help with the effects of menopause

Why is it important for spa professionals, especially spa therapists and aestheticians, to understand the physiological and psychological effects of perimenopause and menopause apart from the changes on the skin?

For one thing, many women find it difficult to explain how they are feeling during these times, and will often avoid mentioning them.

Understanding your client is essential. A long-time client might suddenly feel more emotional and need a quieter, more soothing treatment. Another experiencing hot flashes may feel more relaxed and respected when you understand her sudden need to toss aside a spa comforter from a treatment table, or throw open a window, or down an extra glass of cold water.

During perimenopause, physical and emotional symptoms can peak. Women at this stage need and crave rest and recuperation, a fact which can amplify the potential benefits of the spa experience.

Menopause-onset anxiety can be one of the most difficult symptoms to cope with. But for the client, simply knowing she is not alone can be immensely comforting.

Being able to talk openly about her anxiety can also be very therapeutic. The mental pressure she may be feeling needs understanding and compassion, and as a spa therapist, you can help simply by being present and listening without doling out solutions.

Other symptoms? Some women report suddenly feeling unable to cope with situations that were never a problem before, or feeling overwhelmed by routine aspects of living. Such experiences frighten them and undermine their confidence – even to the point where some may feel as though they’re losing it.

Psychological symptoms may be related to physical changes brought on by the rebalancing of hormones. Falling estrogen levels can make a woman feel emotional. Dehydration caused by night sweats and hot flushes can trigger exhaustion and panicky feelings. Memory lapses are common – leading to anxiety, or a sense of losing control.

Benefits of touch for perimenopause and menopause

The touch component of your treatment will make the biggest difference. As I pointed out in an earlier article, a lack of simple human contact in the early stages of life can be tragic. In a cruel but noteworthy experiment, Austrian-American child psychiatrist René Spitz deprived a group of orphans in the early 1940s of virtually any physical contact. The babies were fed, clothed and kept warm, but were not played with, handled, or held. As a result, they became withdrawn and sickly, and lost weight. Many experienced infections or actually died.

Professor Francis McGlone, a cognitive neuroscientist at Liverpool John Moores University in the UK, deems touch ‘a biological necessity.’ Recent studies by him and others have confirmed the powerful connections between skin nerves known as C-tactile (CT) afferents and the parts of the brain that process emotion. CT fibres stimulated by slowly stroking the skin activate portions of the brain involved in socially meaningful sights, sounds and possibly even smells.

In a lecture at a recent World Wellness Conference in Mexico City, neuroscientist Claudia Aguirre likened skin to a second brain – complete with its own hormone production (cortisol, estrogen, testosterone, etc.) and anti-oxidant defenses.

In short, touch is imperative to survival. Physical touch sends a sensation of warmth through our body and gives us a feeling of security. Getting a hug from someone you like, and trust, can turn your day around.

The hands of a spa therapist work in two ways as a gateway to better health. First, the so-called fast nerve fibre tells your client’s body of the physical sensation of touch. Then the slow nerve fibre talks to her brain on a deeper level, sending a message to the (deeper) limbic part of her brain – associated with motivation, emotion, memory and learning.

The numerous benefits go beyond the emotional level, and include lowered heart rate and blood pressure, reduced cortisol levels (i.e., less stress), and an enhanced immune system. Touch tells our parasympathetic nervous system to reduce stress and move us toward a state of contentment and relaxation. Though important for both sexes at any stage in life, this kind of intervention is especially crucial in perimenopausal and menopausal women.

Touch can also affect our body’s levels of oxytocin (the ‘cuddle chemical’ which reduces cortisol) and endogenous opioids (linked with mood, lower pain and lower anxiety.

Touch receptors cover the body and different types of massage will work on different levels; a lighter massage will stimulate oxytocin release, while a deeper massage is linked to a release of endogenous opioids (e.g. endorphins).

The key is to be aware of what’s going on with your client and, if she’s comfortable, openly discussing such available resources as Wellness Warriors or My Second Spring.

Both of you will have a big head start in the healing.

Vivienne O’Keeffe, AAD, PEA, CIBTAC, is President of Spa Profits Consulting Inc., and an expert in designing successful spa concepts. She is also an international consultant in developing product lines, treatment plans and training programs, a member of ISPA and a recipient of the Spa Industry Association of Canada Outstanding Industry Service Award in 2001, 2005 and 2012.